Europe: Champions League
Signal-Iduna-Park
FT
1 - 1
(1 - 1)
Dortmund
Sevilla
⚽ J. Bellingham (35)
⚽ T. Nianzou (18)
LineupsStandingPreviewReview
Despite having already suffered three very notorious defeats this season, Borussia Dortmund are high up in the table and are tied on points with Bayern in fourth place. Yet, the feeling is that some things haven’t clicked for Edin Terzic’s side.
FC Köln showed Dortmund’s weaknesses once again, and even if Dortmund beat Sevilla comfortably last week, the La Liga side also managed to score and make the beginning of the match very difficult.


But what are some of those low points in the BVB performances?

Dortmund have struggled to keep a clean sheet against demanding opponents; they tend to maintain a relatively strong defensive scheme but commit too many individual mistakes.

Their weak points are starting to be noticed and targeted by the opponents as BVB have not dialed in the pressing idea that Terzic wants to execute.


During the season, Edin Terzic and the squad have shown their versatility by adjusting defensively to their opponents.

They’ve played in a mid-block with a clear 4-2-3-1, a 4-4-2, and even a 4-5-1 depending on the opponent, but in all cases with the same principles: Holding the lines of the mid-block near the center of the pitch, leading the play to one of the flanks and collapsing towards that side to trap the other team’s build-up.

It’s also worth noting that with either scheme, Dortmund shape for the high pressing with a 4-1-3-2, especially when the opponent has just 1 holding midfielder, but the movements are not flawless and the rest of the pressing scheme fails at times. 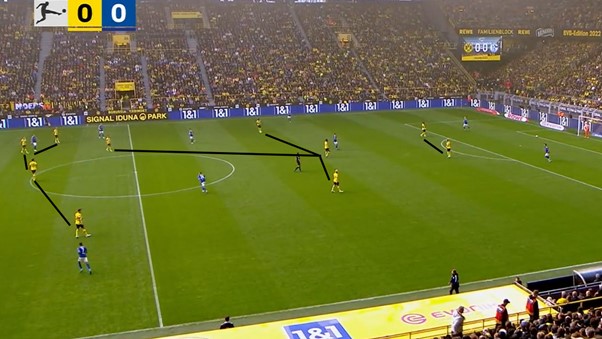 With all the schemes, the team has been able to deny build-ups here and there, but they have not done it constantly enough to avoid conceding goals against strong teams.

Dortmund have also failed in intercepting the opponent's long throws behind the back of the defensive midfielder and the defensive line.

Against Leipzig, BVB were torn into pieces with through balls from quick offensive transitions to Nkunku and Werner that neither of the centerbacks nor the midfielders stopped.

The midfield line is surpassed quite quickly as Brandt is usually too high up the pitch due to his offensive role, while Bellingham and Özcan are too separated at times.

That leads to another aspect of the defense: whenever a defensive press does not work, you need to rely on your defenders to step up quickly and cut the opponent’s advance by intercepting, committing a foul, or slowing down the play.

Niklas Süle and Nico Schlotterbeck are very good by air and with the ball on their feet. However, both centerbacks suffer when the spaces behind them are targeted, not just with the Black and Yellow but with the German National Team too.

They’re not slow but their positioning and awareness are not yet at the consistency required to dominate these situations.

Whenever they are pulled out of their zone they can get lost and aren’t quick enough to return to their place.

As BVB’s fullbacks always step up to reference and follow their closest man, the space behind them need to be covered by Süle and Schlotterbeck because Ozcan/Dahoud are usually marking someone in the center and lack the quickness required.

Köln took advantage of this for instance, as at the start of the second half they started to pull Meunier and Guerreiro out of position and attacked the space left behind, forcing the center-backs to cover the runs.

In one of these movements, Schlotterbeck wasn’t aware enough of the run behind his back and was not covered by Süle. The play ended up in a goal for Köln. 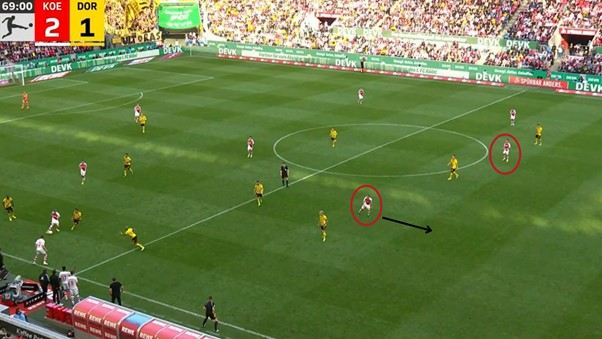 Dortmund couldn’t control the overload down the wings against the FC, nor Sevilla.

Both the Hispalenses and Die Geißböcke hurt Dortmund through the flanks, with the Spanish side creating danger frequently with crosses from intermediate positions. 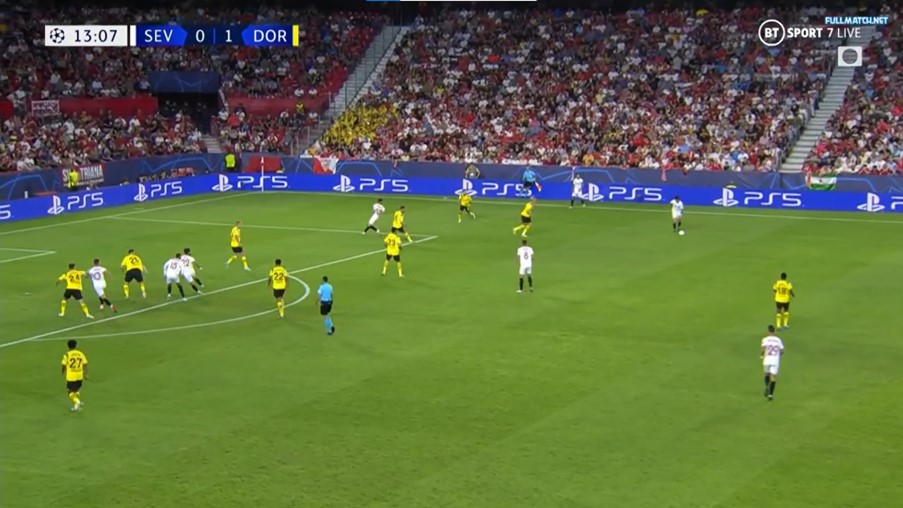 Despite how good Süle and Schlotterbeck are in air, they cannot block everything.

5 out of the 13 goals conceded by BVB this season in all competitions so far have been headers.

4 of them came from a corner kick: Werder Bremen, Leipzig, Köln, and Sevilla; all scorers were near or marked by Schlotterbeck.

An additional 3 goals have been scored from crosses, making them 8 out of 13 coming from the flanks (counting corner kicks).

Against Sevilla, Meyer was superb with his saves from close-range headers and shots, but he will not save Dortmund every fixture if he gets shot at like that.

Indeed, this aspect is also linked to the injuries, especially Haller’s and Reus’, but Dortmund’s attacking ideas are a bit stalled. 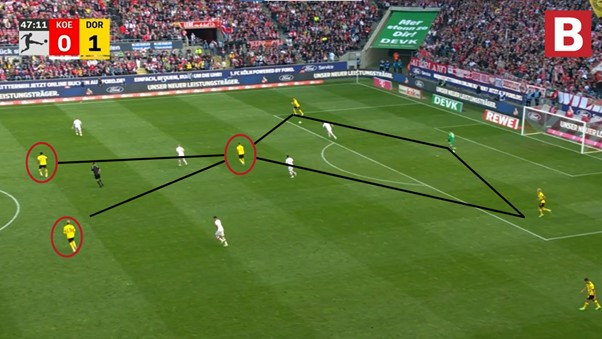 Borussia Dortmund always look to generate superiority with the keeper and the midfielder dropping in, but whenever they are forced another way they get stuck a bit.

Sevilla forced Dortmund to play long, winning most headers but lacked the intensity to win the second balls against the Germans.

En-Nesyri stayed with Emre Can as Suso and Isco went to press Dortmund’s center-backs, forcing them to play with the fullbacks or a long pass to one of the midfielders/forwards.

They did make things complicated for Terzic’s squad until their fitness started to decline.

Whenever Dortmund are forced towards one flank and denied the interior pass, the BVB struggle to keep progressing the play. 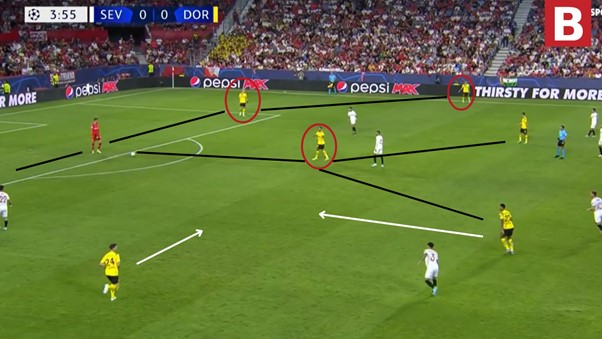 Jude Bellingham helps with the build-up quite often, but tries to push a bit higher on the pitch to stretch the opponent’s lines, meaning he has to cover a good area to come close to the base of the play.

The English wonderkid solves this at times with his skill, dribbling through traffic and changing the side of the play, but it’s not a reliable way of doing it as a team.

Without Marco Reus, Dortmund miss the creativity and decision-making the German genius provides.

Gio Reyna spends more time on the sidelines than on the pitch, and with Brandt not being as clinical as Reus and having to occupy different zones of the attack during the matches, the Yellow and Black lack that final pass and calmness in several matches.

Julian Brandt has been performing solidly this season, linking up with Bellingham to give sense and direction to Dortmund’s attacks.

The German has looked a lot more comfortable when he’s able to start from the wing into the center of the pitch to surprise the defenses.

After Reus’ injury, the former Leverkusen player has been playing as the third piece of the midfield in a role that does not suit his best traits.

Brandt has looked far better and more comfortable when he has a solid midfield trio supporting him as he can have more freedom.

But whenever Bellingham and Brandt are having an off-game, BVB’s offense stalls.

Doney Malen and Karim Adeyemi have not been able to produce plays by themselves cutting inside to shoot with their best foot.

Adeyemi has struggled in his first season in the elite; he is still getting used to his role as a winger with the defensive diligence required at this level and has not found his right rhythm offensively.

The amount of players Dortmund summon in central positions after the wingers cut in and the fullbacks overlap is too high at times, jamming the attack, and have not been able to completely take advantage of how well they reach crossing positions.

Modeste is the only real target inside the box, and he has not been his usual self in any sense, and connecting with players arriving in a second line is harder with so many bodies inside.

Against Sevilla, Schalke and Bayern, Yousoufa Moukoko’s performances gave Dortmund a much more complete role at the front of the attack.

Terzic himself praised the youngster’s match against Sevilla FC, having watched him hold the ball well despite his physical inferiority and being a lot more mobile attacking the spaces.

Moukoko allows Dortmund’s game to be a lot more fluid, the youngster connects better with Brandt and Bellingham than Modeste does so far.

Dortmund’s squad has a very high quality-low depth rate; their starting XI is very strong, but after the 13th or 14th player the quality of the team fades off.

This is both the result of the transfer market and the number of injuries Dortmund have suffered so far.

BVB have had up to 9 players injured at the same time, including Haller’s diagnosis and Reus’ heart-stopping injury scene against Schalke.

The lack of bodies hurts Terzic’s decision-making, not only for rotations but for in-game adjustments.

Going back to the game against Köln, after going down 2-1, The BVB executed the 4-1-3-2 diamond press with Brandt as a holding midfielder when pressing higher. 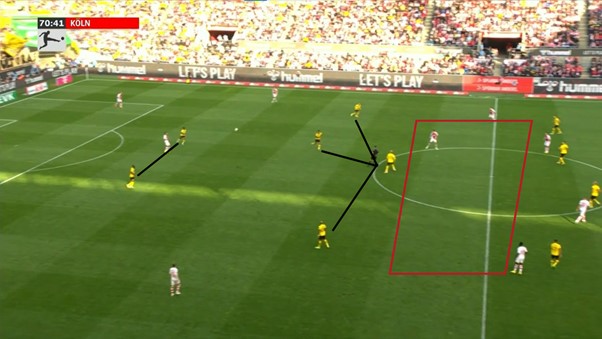 They conceded a goal as a result of that change when Koln jumped two lines with a lobbed pass into the midfield.

It made sense as Brandt is better in the construction phase, and Bellingham is far better at pressing, but they were out of position nevertheless.

You can’t blame Terzic for not putting on Can before doing that adjustment, as we all know the form the former Liverpool player currently is despite playing the full match against Sevilla.

But that's it. That was the only possible substitution Terzic could have done to fix the position to affect the match, and the same goes for the players down the flanks.

The blueprint is there, and the potential for BVB to go all the way is there.

The team has done well enough with the signings and Terzic’s appointment for them to be still battling in the league and the UCL.

Apparently, the plan is to trust the German coach long-term, and so far it looks like the right call.

Injuries have influenced the performances so far, but there are some things to change if they want to be in the conversation all the way.

Not only from Terzic, but from the players too.

More about the match

Hummels critical of BVB after draw with Sevilla
Bellingham scores as BVB and Sevilla take a point each
Borussia Dortmund vs. Sevilla FC preview: Team news and predicted lineups
Terzic "pessimistic" about Reus ahead of Sevilla clash, Kobel likely to be back in goal

More about the teams

Choupo-Moting and Upamecano miss Bayern training ahead of Wolfsburg clash
Zentner and Widmer ruled out of Mainz's trip to Berlin
Streich could make "three or four changes" against Dortmund
Glasner speaks on Max and squad rotations, Schwarz hints Cigerci is ready to start