We take a look at what 19-year-old Brian Brobbey can add to RB Leipzig, assessing his strengths and weaknesses.

RB Leipzig announced earlier in March that teenage Ajax striker Brian Brobbey will be joining them this summer on a free transfer.


Here we take a look at what his numbers tell us about the Dutch under-19 international.

The main takeaways from Brobbey's stats are:

These are demonstrated in more detail by the charts found in the second half of this piece.

Brobbey has spent most of this season playing for Ajax’s reserve side Jong Ajax, a mid-table team in the Dutch second tier, the Eerste Divisie.


He’s only become a regular in the first-team squad after Klaas-Jan Huntelaar left to join Schalke in January.

While the sample size for his performances in Ajax’s first team in the Eredivisie/Europa League is far too small to draw any firm conclusions from, his numbers are undeniably impressive.

After being named on the bench three times in the Champions League, he then started the decisive final group game against Atalanta, but was subbed off at half-time due to injury.

He’s since come on as a sub in every Europa League match, although that’s in no small part because Ajax’s big winter signing Sébastien Haller is ineligible to play in the competition due to an administrative error.

But regardless of how it’s come about, Brobbey’s certainly seized his opportunity well. He managed a goal and an assist in the round of 32 against high-flying Lille and then scored again in the round of 16 clash with BSC Young Boys. That works out as a goal involvement every 20 minutes.

He’s yet to start in the Eredivisie, and his seven sub appearances only amount to 109 minutes of play.

Still, Brobbey has two goals and an assist to his name so far, even if they came against Fortuna Sittard and Willem II rather than any of the league’s bigger clubs.

As well as the small amount of playing time for the first team, the stats available for the Eerste Divisie are limited, which means no xG/xA figures or on-pitch data (shot location, shot placement etc).

Nonetheless, the numbers give a clear indication of some aspects of the striker’s game. 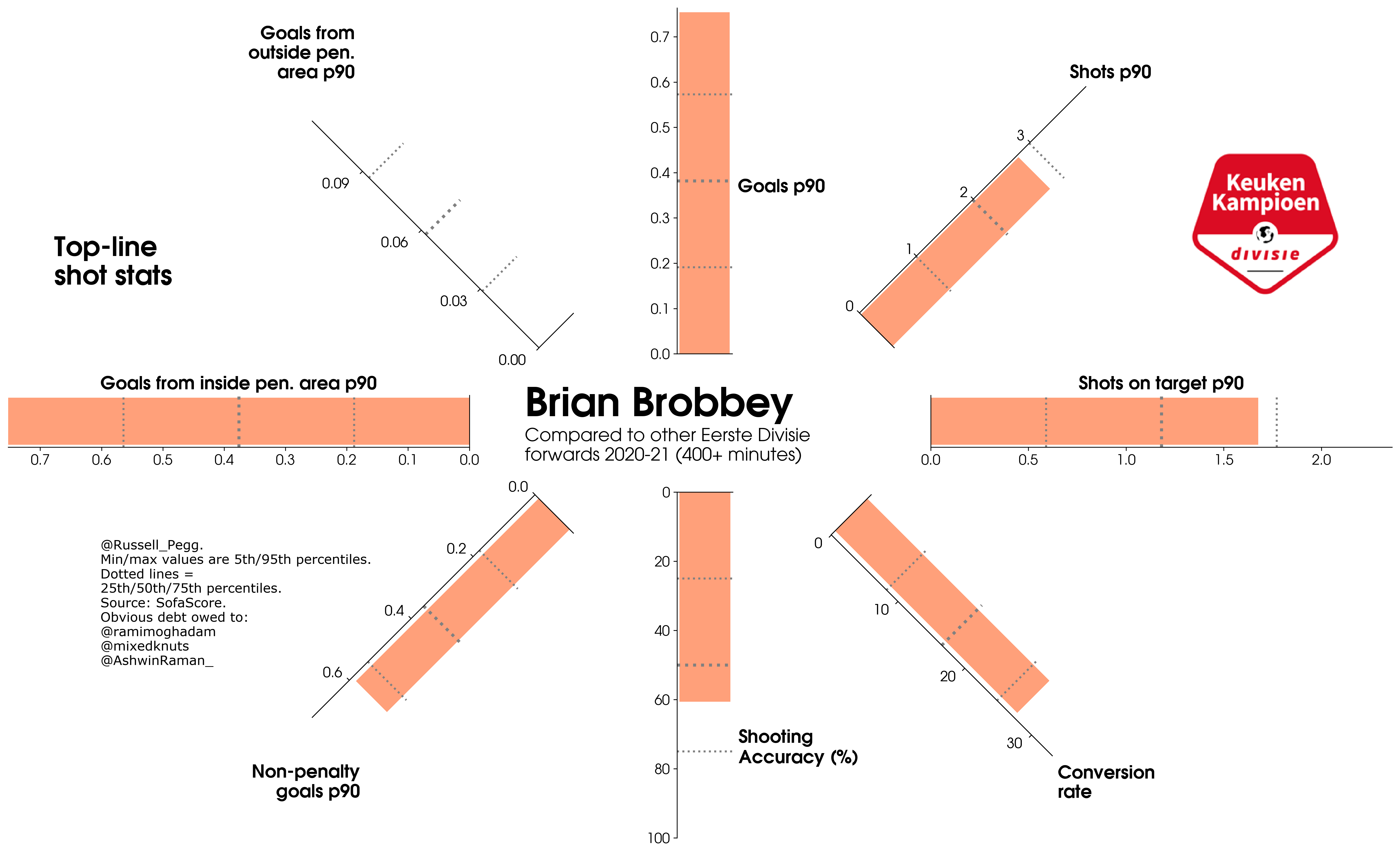 • Brobbey’s shot volume is high but not huge and his shooting accuracy isn’t great, but his conversion rate and non-penalty goals per 90 are both good.
• He poses virtually no danger from long range, with zero goals from outside the box and no shots from set pieces. 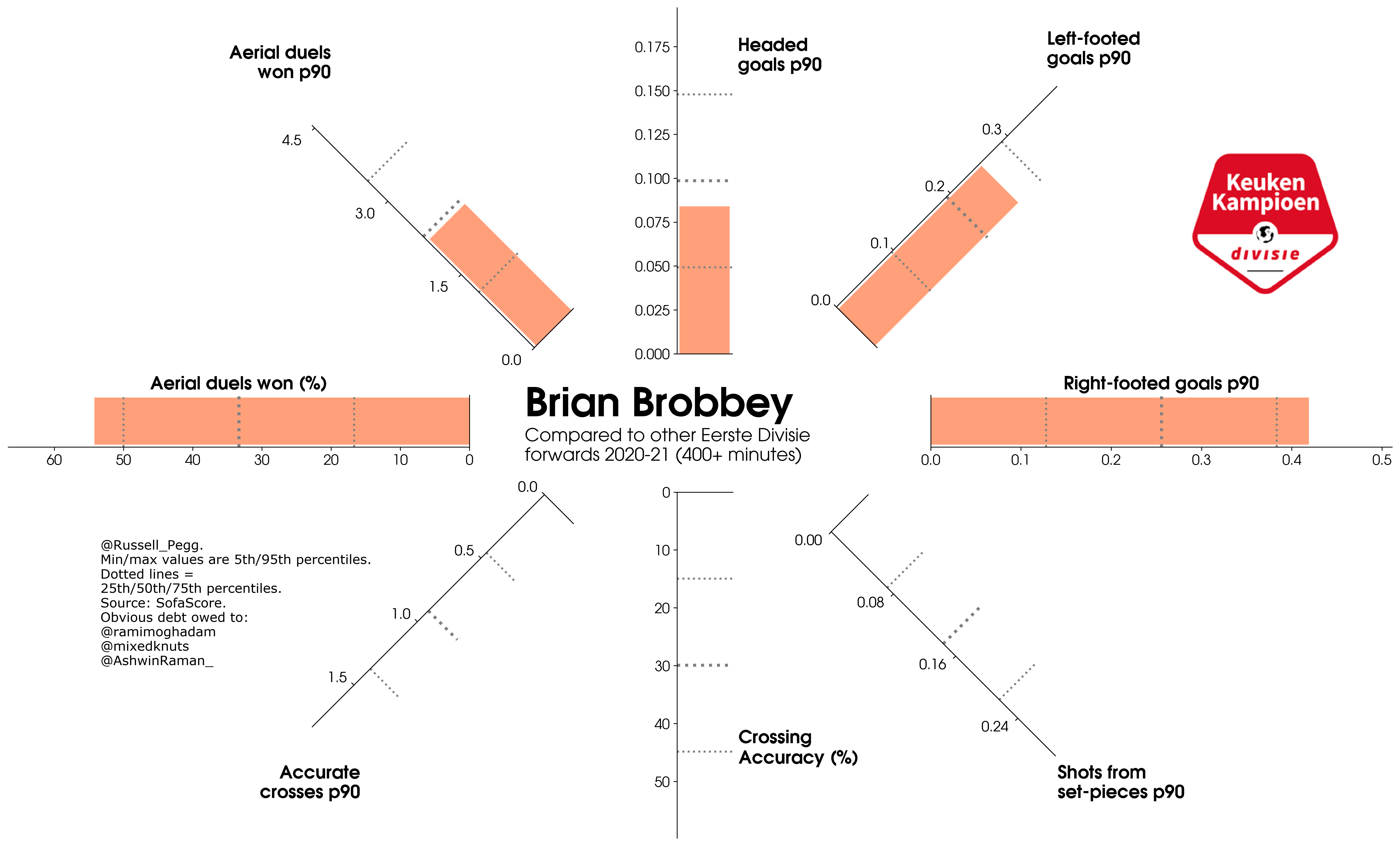 • He’s a triple threat, able to score with both feet and his head.
• Brobbey has no discernible crossing game…
• … but that’s likely to be because he’s good in the air. 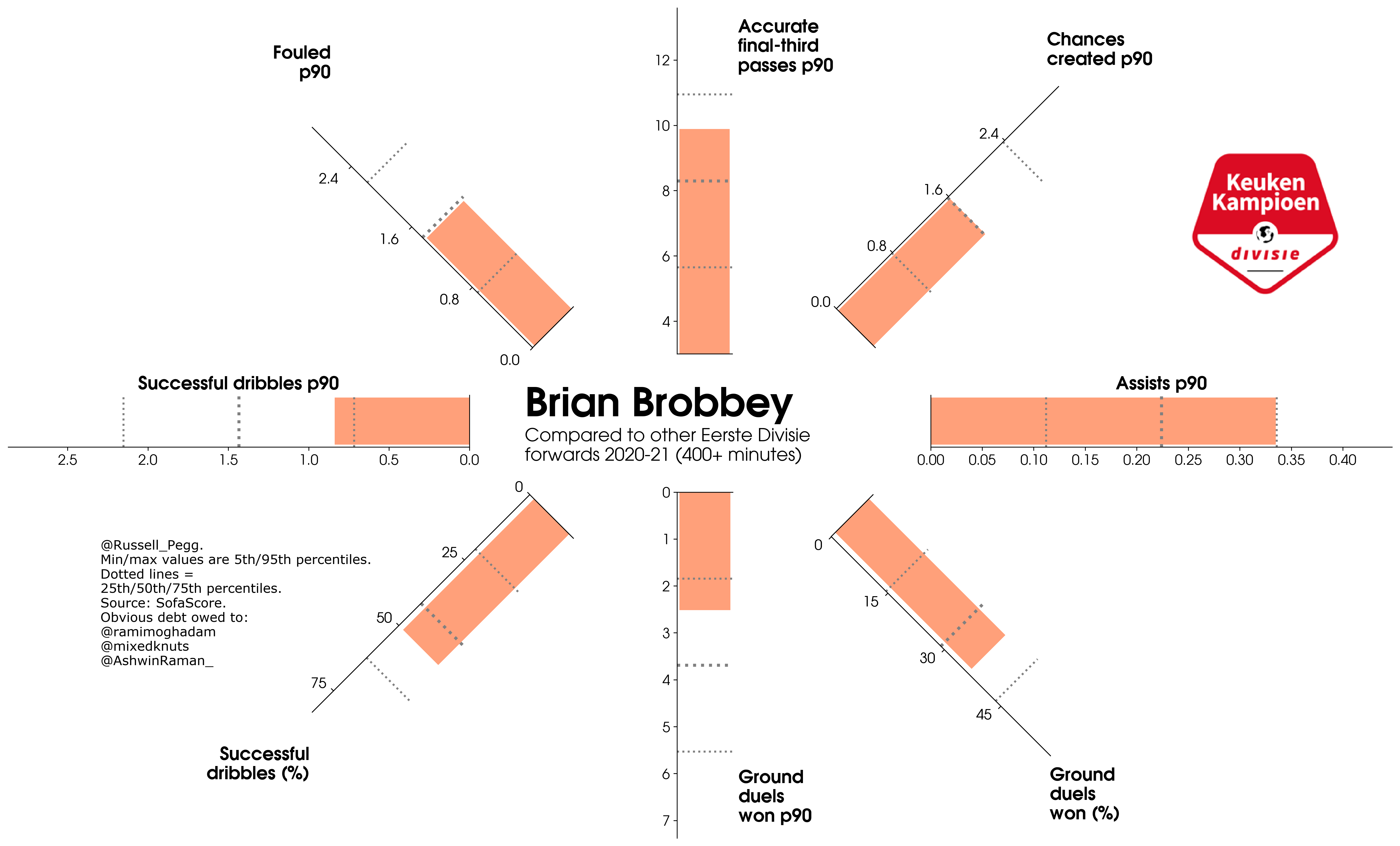 • As well as being a decent finisher, his creative game is also good.
• He isn’t a great dribbler, but he still draws a fair few fouls.

Finally, one thing the charts don’t show is that Brobbey doesn’t do the dirty work in terms of top-line defensive stats. He’s managed just two interceptions and three tackles in more than 1,000 Eerste Divisie minutes.

Hector brace leads Köln over Leipzig, result puts Schalke on the verge of relegation
German footballing executives united in opposition to Super League: "We are advocates of sporting competition."
Bundesliga Tactics Talk: Round 29
Lothar Matthäus: 'I'm convinced that Julian Nagelsmann will be Hansi Flick's successor'
Nagelsmann explains decision to take Angelino off at half-time
Jesse Marsch weighs in on coaching transfer fees: "Perhaps it's the way of the future. I don't know"

Bundesliga Team of the Week: Matchday 29

What the numbers tell us about RB Leipzig-bound Dutch youngster Brian Brobbey
10 things you may not know about Florian Wirtz
Lothar Matthäus: The Legend
Andrej Kramarić is officially Bundesliga's greatest Croat marksman

Lothar Matthäus: The Legend
Germany's fiercest derby? A lookback at four epic Revierderby matches
Gladbach played a ghost game in Berlin ... more than 50 years ago
Turn back time to ... When Dzeko and Grafite fired Wolfsburg to an unforgettable title