BVB stars are ranked higher than Bayern aces, but the Bavarian giants one up rivals with most represented players.

Erling Haaland unsurprisingly steals the spotlight as Bundesliga’s most valuable player, in the biannual transfer value list published by CIES Football Observatory – the research group within International Center for Sport Studies, based in Switzerland.


A variety of factors are considered in order to finalize players’ market value, such as age, club and country represented, performances and contract duration.

A total of thirteen players from the German top tier make up the top 100 list. Bayern Munich are the club represented the most with six players, closely followed by Borussia Dortmund who have five players. Bayer Leverkusen and RB Leipzig have one player each in Moussa Diaby and Dani Olmo, valued at €81m and €60m respectively. 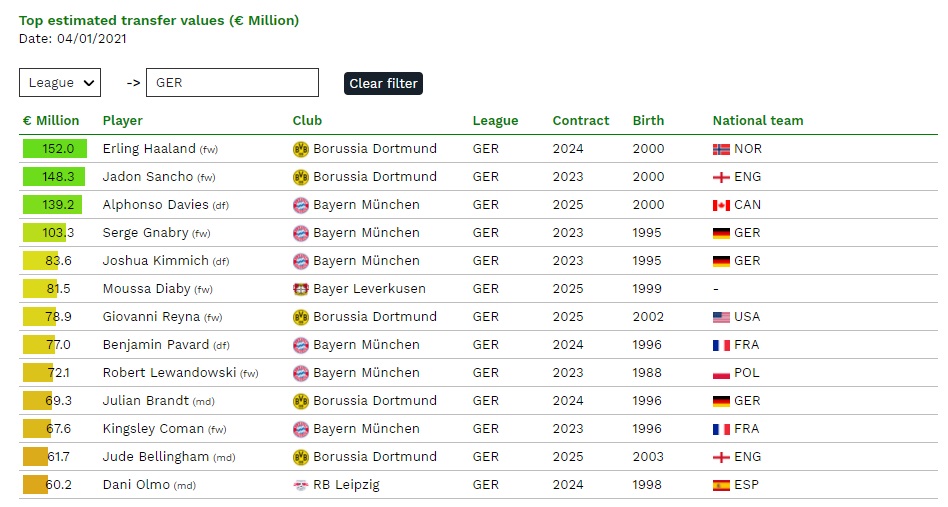 Haaland stands a strong second on the list with an estimated transfer value of €152m, behind Manchester United’s Marcus Rashford who is valued at €165m.

Erling Haaland’s highly rated teammate and England international, Jadon Sancho, takes up the sixth position (€148m), lagging just €1m behind PSG’s Kylian Mbappe. Bayern’s Alphonso Davies is eighth (€139m) on the list. He is the Bavarian’s highest valued player and second most expensive defender on the list after Trent Alexander-Arnold (who sits in the third place with €151m).


The following are the Bundesliga clubs and their players that make up the list:

These are the same four clubs that showed solidarity to help rival teams facing financial difficulties during the pandemic crisis. Each team pledged €20 million euros to aid severely affected clubs in the top two German divisions.

Schwarz speaks on decision to remain in Russia: "It was about being there for those around me."
Petrakov and Klitschko express gratitude for Gladbach exhibition: "Thanks for the great atmosphere!"
Kickoff time and brodcast rights for Gladbach-Ukraine benefit match set
Gladbach to host Ukrainian national team for benefit friendly

Nagelsmann on Mané: "The excitement was huge"
Sadio Mané: "My dream is to win all possible titles"
Mané quizzed on favorite position and Nagelsmann's impact on his decision to join Bayern
Watch: Sadio Mané's first words as a Bayern player

The marvels of Urs Fischer
The genius of Stefan Ortega
Adam Hlozek is ready for the big-time
Report: Sadio Mané wants to leave Liverpool amid Bayern links