How is the German national team playing less than six months before the World Cup? In their recent UEFA Nations League fixtures, Hansi Flick's squad displayed some good performances against some quality opponents and showed signs of what the ex-Bayern trainer has in mind tactically for 'Die Mannschaft'.

Played around three weeks after most of the leagues ended, June's Nations League games were a burden to the players. Many of the stars in League A had already featured in 50+ matches through the season and now had to play again just for the sake of it and to fit a calendar with a winter World Cup.


The only argument in favor of the matches is that coaches can have quality sparring sessions to check how their teams, and opponents, are shaping up for the World Cup tournament in Qatar, although the players' fatigue at this stage of the season was a factor to consider.

This is exactly what Hansi Flick did during this stint of games, as he also showed a good amount of signs of what he wants and demands from his players.

He had the opportunity to face 3 teams with 3 different formations to check the players’ response to the adjustments: Italy’s 4-3-3, Hungary’s 3-4-2-1, and England’s 4-2-3-1 which mirrored Germany’s formation.

It is clear Flick has decided to play with a backline of four despite using three center-backs, with Klostermann as a right-back. 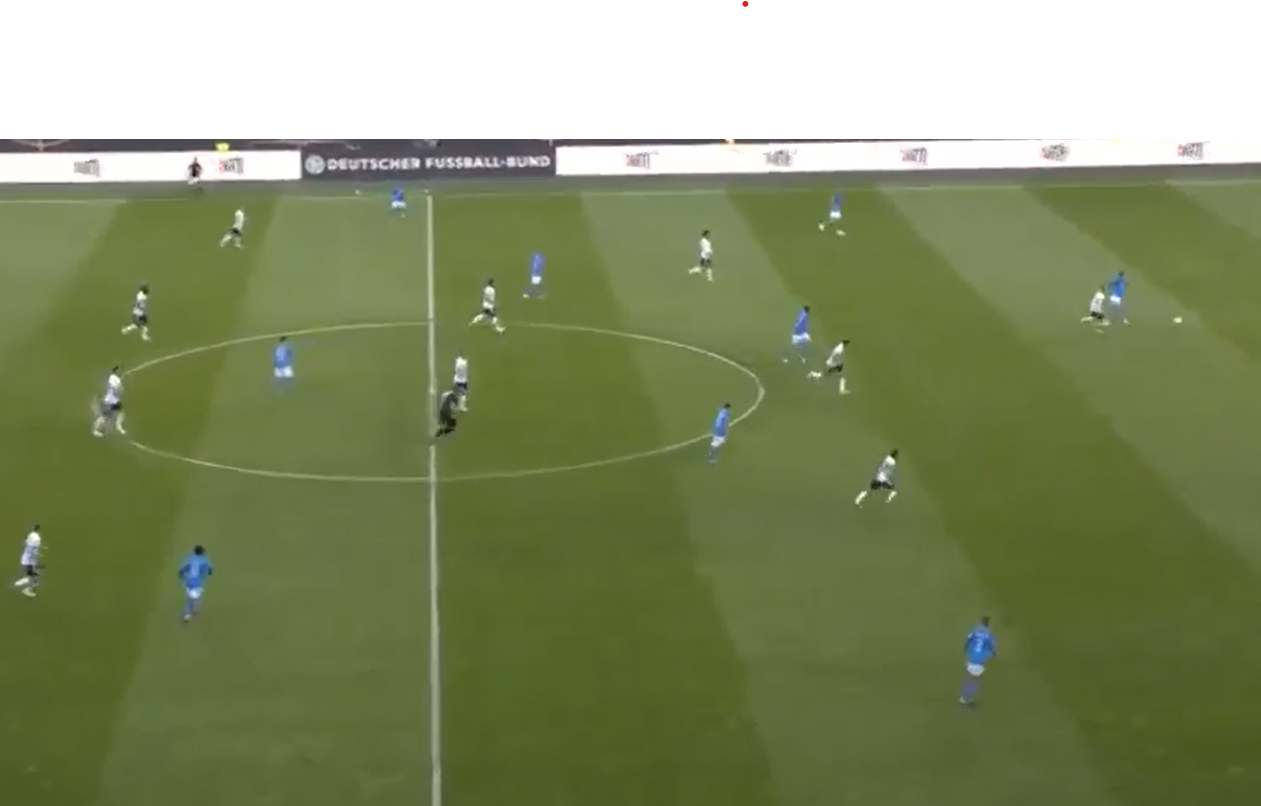 
Despite most of the media and the UEFA itself labeling it as a 3-4-2-1 on the official presentation of the line-ups, it is actually a 4-2-3-1, as Klostermann positions himself as a full-back; Only that he does this in a more traditional way by not giving depth or doing too many supporting runs down the wing.

Looking at his positioning during the build-up and the development of the plays, it’s that of a fullback, just without providing depth or going too close to the line. 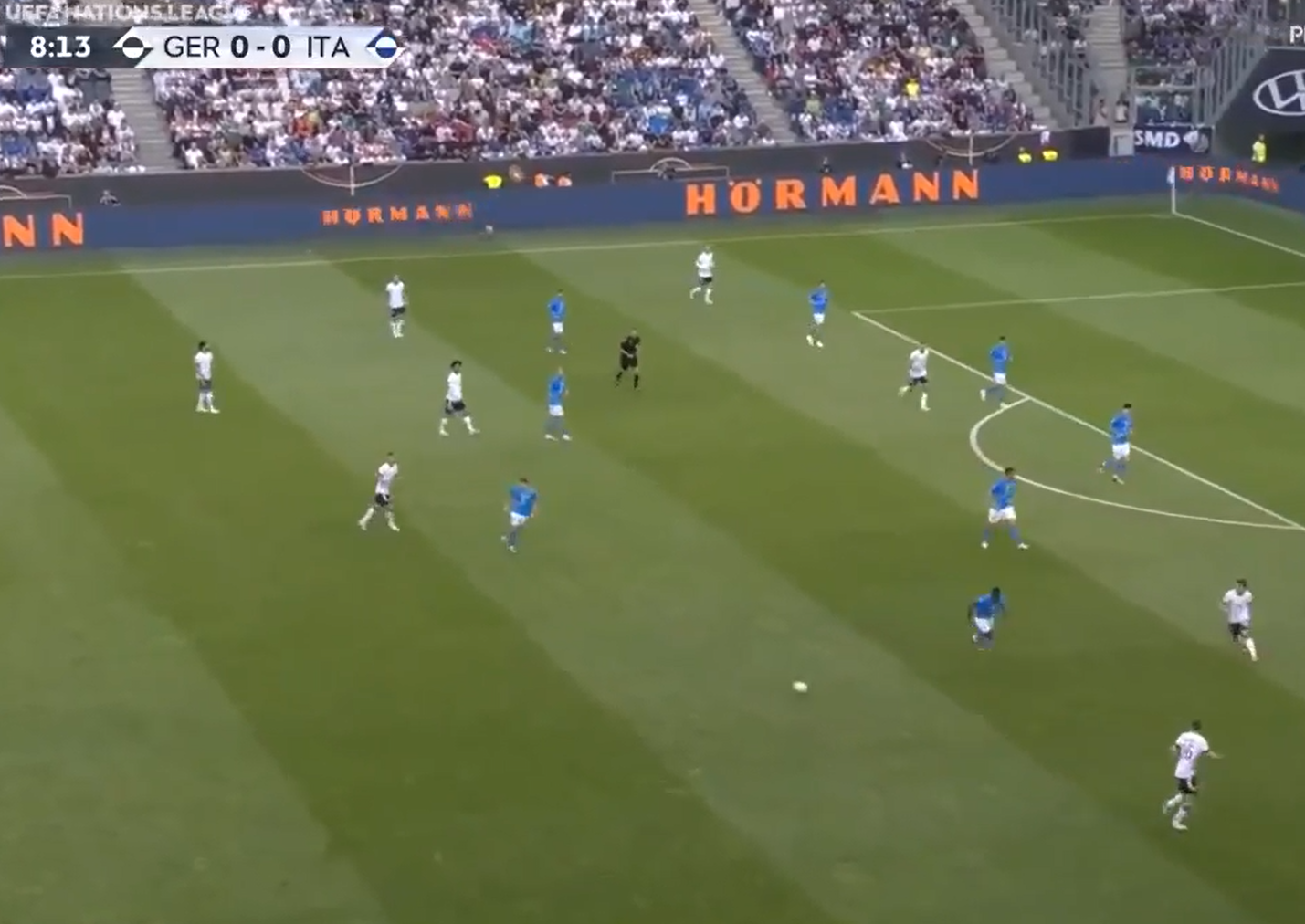 Klostermann acting as a full-back offensively against Italy.

Flick tried a 4-2-3-1 against Italy with Henrichs and Kehrer as full-backs, but that idea was swiftly discarded.

Against Hungary, Kehrer did act as a centre-back in a three-man defensive line.

However, if the team was able to set defensively, it did it in a four-man line with Raum backing down as a regular left-back, not as a 5-man defensive line with Hofmann as a wingback; maintaining the 4-2-3-1 formation.

Defensively, the team sat on a middle-high block, pressing quickly to force the opponent to go long more than to try to steal the ball itself, as one of Die Mannschaft’s strengths was the defensive aerial duels where Rüdiger, Schlotterbeck, Klostermann, and Süle excelled.

Die Mannschaft won 9.3 aerial duels per game during the Nations’ League fixtures, with Schlotterbeck on top with 4.5. 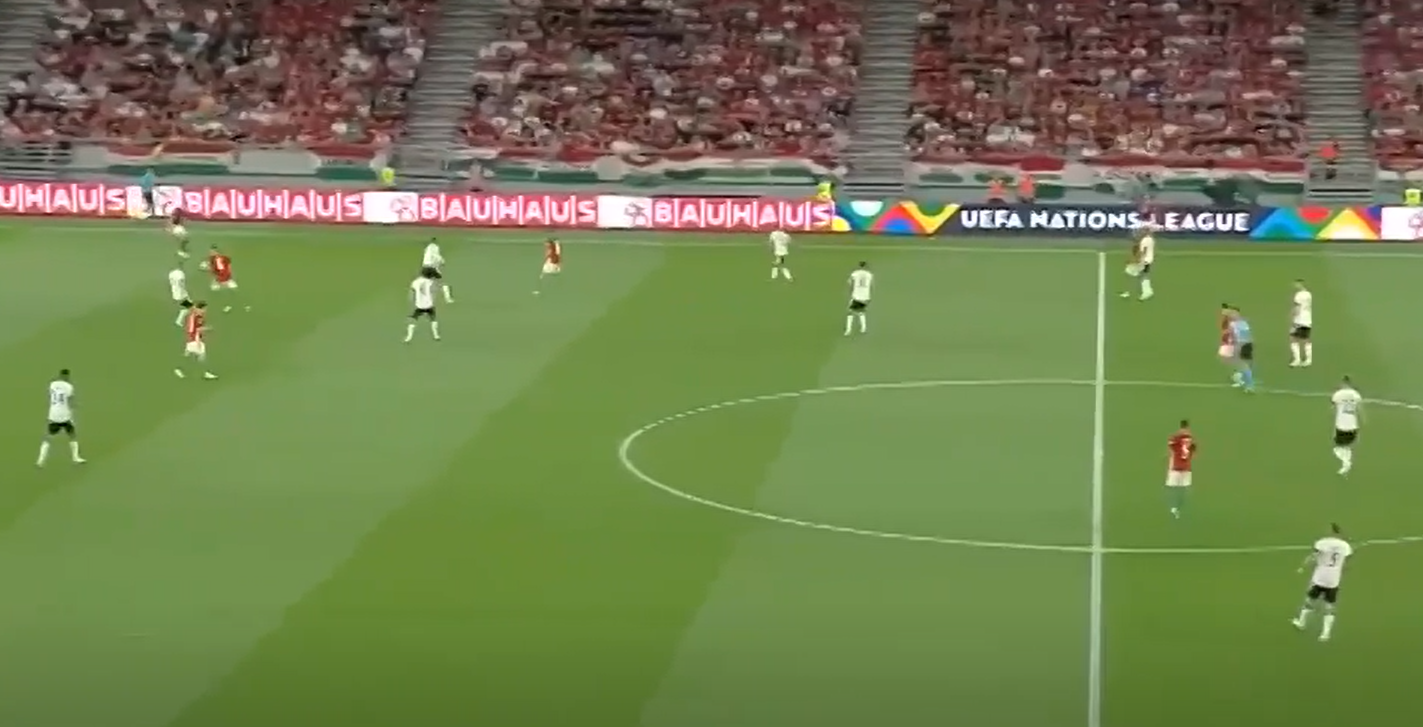 Germany's defensive setup against Hungary with Kehrer as a right-back

If the opponent decided not to go long but instead one of the forwards dropped to help, the centre-backs had the license to follow him as far as needed to avoid him playing a comfortable pass or to turn and face the goal.

The line of four holds well in overall terms, is strong in air, and showed prowess in repelling attacks from a set defensive position if they were able to maintain focus.

The team allows 15 crosses per game, there should be an improvement there but it’s not a direct consequence of bad defending.

The problem comes when they are caught backtracking, as they are susceptible to long balls behind the back, especially behind Klostermann and Raum.

Part of this problem is out of the hand of the defensive line, as it starts with the midfield/offensive player not cutting the counterattack short; either by anticipating or committing a tactical foul.

Die Mannschaft made just 4.5 interceptions per game; Yes, it is a direct consequence of the offensive style the team plays and the high pressure to force the other team to go long, but it is a improvable number, especially to cut the opponent’s attacks after losing possession.

Germany allowed way too many offensive transitions and counterattacks that lead up to danger against Manuel Neuer’s goal.

They were out-shot by Hungary and England, while having just 1 more shot than Italy in the first duel and summing the great number of 0 clean sheets, with the detail of the doubtful penalty against England.

There are signs of improvement with the pressing, although there is still a lack of intensity at times and room for improving the pressing triggers. Hopefully, it will come along with repetitions and work.

Both matches against the Azurri were a nice challenge to test the adjustments of the midfielder in the pressing, as they faced a team that had the numerical advantage in midfield, meaning one of the offensive midfielders had to watch one of Italy’s central midfielders.

Kimmich and his companion in midfield must be very aware to balance their pressing going forward with not leaving any offensive player act behind their backs with a gap of space too wide for the center-backs to reach on time.

They also did well minimizing mistakes and losing the possession in the first two phases of the offense.

All 5 of Rüdiger, Schlotterbeck, Süle, Klostermann, and Raum are fundamentally sound with the ball, with a special mention to the first 3 with their great passing abilities for being center-backs.

Rüdiger, Süle, and Schlotterbeck broke the opponent’s lines several times each game with their passes; either with through balls to the strikers or midfielders in the pockets, or with long launches behind the defense’s back.

They directly produced two goals through this, while also having the confidence to carry the ball forward, even when pressed.

This is great, not only as it widens the passing options but also because it allows the team to take risks building up from behind, soaking the pressing thus stretching the opponent, while also giving confidence to the midfielders to give the ball back if they’re being pressed.

This has a lot to do with Germany’s 60+ ball possession each game; if it is possible to launch a quick transition they’ll do it, if not, then there’s no need to force it.

As soon as the team recovers the ball or starts the construction phase, Raum and Hofmann launch forward as quickly as possible trying to take their markers deep to create room for the midfielders to move and provide passing options.

Raum’s movement is more noticeable, as he starts from further back and goes further up than Hofmann.

Kimmich goes down to provide the first pass and manage the build-up, he can go either from the centre or into the side of one of the two defensive backs.

Gündogan has similar behavior, while Goretzka tends to push a bit higher to take the pressure off Kimmich by carrying his marker, as he also tries to gain an advantage with his physical presence.

Gundogan drops next to the centre-back, while Kimmich drops as a regular central midfielder; Klostermann pushed high earlier on the play and Raum is at his usual height.

Hofmann adapted to the role better than anyone expected to, he provided depth, worked the wing up and down, and understood well when and where to attack the spaces, either on the outside or sprinting towards the goal.

His understanding with Thomas Müller worked very well too, they interchanged offensive positions quite often as part of Muller’s freedom to move and create.

The area of action of the active player with more goals in the World Cup has a lot to do with the team’s trend of attacking down the right side.

37% of Germany’s attacks come through the right side, it is not a wild number, but it is interesting comparing it to the 32% on the left side with Raum and the 31% down the middle.

The attacking midfielders that occupied the left side of the attack moved around the inner halls and the middle of the attack, trying to leave Raum as much room as possible.

Musiala did this in a more obvious manner, as he cut from the wing into the goal to go to his dominant right foot, but even Sané moved around similar areas despite not having to cut in to have a chance with his strong foot.

All the offensive players have the freedom to interchange positions, make runs behind the defense, and try to overload a side to create spaces.

The few times the team was forced to go for a long pass to sort the high pressing, trying to find Werner behind one of the full-backs is the best option, as neither he nor Havertz are able to win an aerial duel or at least battle it to allow the team to recover the second ball.

Raum could benefit from more passes into the space to change the side of the play and give him the advantage to attack his defender or cross, but there’s no one to cross the ball to him, as Kimmich tends to be in uncomfortable positions for him to make a good pass from side to side, and no other player seems to dare to try.

All up until the attacking third works well overall, from then on the team jams; It is not a creation issue, but a finishing one.

There is a lack of accuracy with the passes and the last touch, while the attacking midfielders don’t give enough creativity to sort out the defenses set by the teams on a low block and the forwards look completely toothless.

Sané is still off his best game as he has been the whole season; against Italy, he had several opportunities to give key passes and create direct chances, but was not accurate enough.

Musiala had some glances during the matches where he showed he could be a difference maker, but he also showed he is still a 19-year-old, and even Thomas Müller himself said that he needs to improve his decision-making.

The lack of a solid centre-forward or at least a constantly threatening one might hurt Die Mannschaft in the key games, Havertz does not fit as a striker but has not created real danger in any position.

Werner moves well and creates spaces, but still needs composure and better decision-making on top of regaining his confidence in front of the goal.

Nmecha and Adeyemi are not in the picture.

It was a quite an interesting set of games for Flick and the national team; they showed the work the trainer and the players are putting together, how the squad is shaping up with a few months for the WC, and surely gave the former FC Bayern coach a lot of things to think about.

Bundesliga Team of the Week: Matchday 2

Bundesliga Tactics Talk: Round Two
Bayern cruise to comfortable 2-0 victory over Wolfsburg
Nothing to separate Mainz and Union Berlin in goalless draw
Watch: Paulo Otávio on Wolfsburg's clash with Bayern

How good is Jamal Musiala?
Nico Schlotterbeck: Dortmund’s newest gem
The marvels of Urs Fischer
The genius of Stefan Ortega